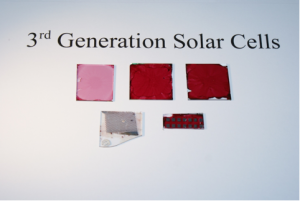 A team of Romanian researchers from the Center for Surface Science and Nanotechnology at the University Politehnica of Bucharest, lead by Prof. Dr.rer.nat. Marius Enachescu – an international specialist in surface science, made for the first time in Romania 3rd generation solar cells based on carbon nanotubes, produced in their own laboratory and with their own equipment. The main properties of the obtained carbon nanotubes, which are 70,000 times thinner than a hair, are their electric current density – 1,000 times higher than that of copper, Young’s modulus closed to diamond’s (the hardest material in nature), the tensile strength – which is 14 times higher than that of Kevlar, and the heat conductor capacity – almost equal to that of aluminum.

The research team led by Professor Dr.rer.nat. Marius Enachescu – an internationally renowned specialist – has achieved outstanding results in achieving its goals as a result of a very good strategy of project implementation. Professor Enachescu returned to Romania in 2009 after having spent ~15 years in the great laboratories of the world, including Lawrence Berkeley National Laboratory, California (USA), and built at the University Politehnica of Bucharest one of the best Romanian physics research teams. Prof. Enachescu and his team created the first laser ablation chamber to produce carbon nanotubes in Romania, a technology that currently can only be found in just a few other labs around the world.
(for details click here)